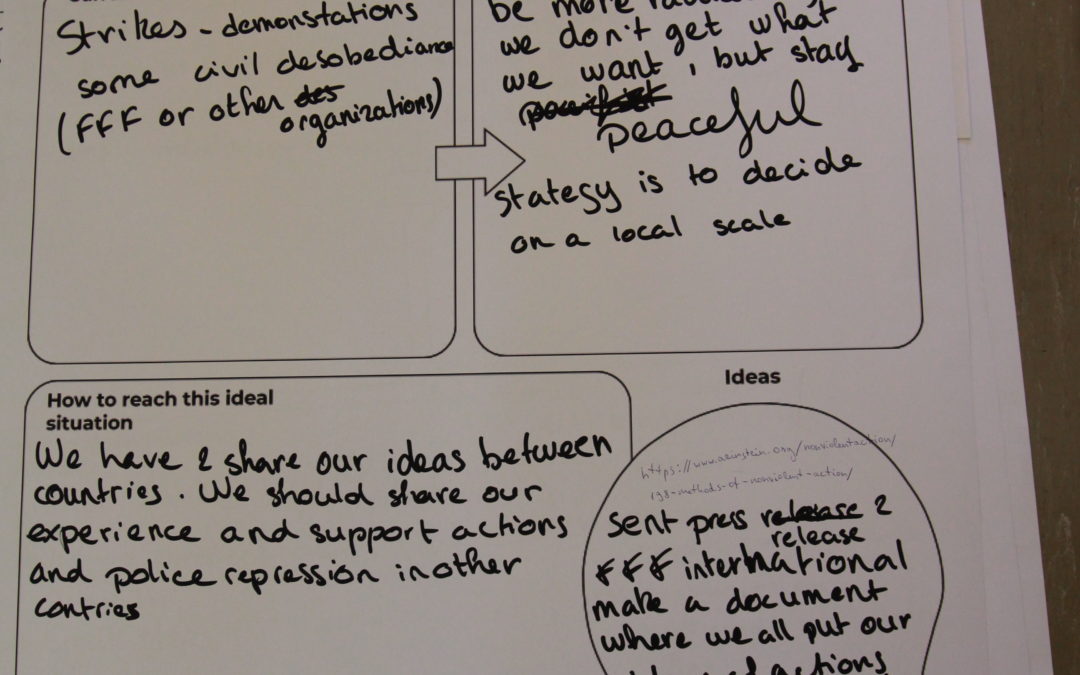 A little group was gathered tuesday morning to discuss about modes of action. They began to approaching the current situation (most of countries are just striking and marching, some are involved in « nice » civil disobedience and appearances in the medias with a goal: to be heard by politicians).
They underlined the need to be more radical and have more direct action. In certain cities, Vienna for exemple, the movement only has “legal” actions, to be more accessible to children, and to make a clear distinction between it and others like XR (Extinction Rebellion), and their main course of action is speaking to politicians. In others, like Naples, the movement supports civil disobedience and tries to make it accessible to every participant. The action in schools through a teachers’ manifesto. Some are also in touch with worker unions, but they don’t have the same weight in the power struggle in every country, still important.

They discussed about civil desobedience and the need to acting as a threat to the government and the lobbies behind it and to stop asking the government or the police for permission for strikes or actions. And to be seen as a threat, one has to act and be seen as a threat to gain power against the government, the lobbies and the big companies. For they, it was important to get as much weight as possible in the power struggle so that our opinion is heard. In their opinion, talking to politicians and making petitions and marching can only get us so far, however it is good to talk about this kind of thing in the media, and not give up strikes and marches.

The participants talked about the relationship with the working class, they are conscious that the movement is seen like a young movement and the need to collaborate with the working class to a few reasons: to not be seen as a threat to them, to be seen as a threat to the owners of the means of production and to have a much larger amount of people in the movement.

Finally, they spoke about the action ideas: Anything from non-violent to more intense…from banner drops and theatre to occupying banks/factories. Some ideas are: drop banners from highly visible places, organise concerts, theatre shows, art shows that address the climate crisis, organise infokiosks, and “classes” to educate people about revolt, climate crisis and how to fight it, protest internationally when people in certain countries get arrested, occupy empty buildings (squatting) to have a space to organise FFF events as well as a place for people to live in a community, sabotage companies, block companies/banks/parliament/factories, go into parliament/high media coverage places and show that we are here, organise big international demonstrations, block streets, crossings, roundabouts, international blockages such as Ende Gelände, going to the houses of the biggest investors in coal/petrol etc, and protest there, anti-advertisement actions, symbolic funerals, planting trees, protect natural spaces by occupying them (Zone to Defend(ZAD)).