The International #FridaysForFuture Summit in Lausanne (SMILE) has officially been launched. After the travel, which has been long for some (more than 30h of train for some) and an evening of friendly gathering, they had the night to build up forces for the week.

The first day was already a busy one for our participants, which were attending plenaries the whole day. After welcome and opening speeches, they immediately begun studying and commenting the values and principles of the movement, the strategic goals and the demands, which they have to agree upon during the week. 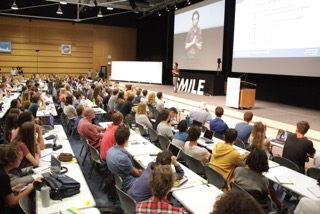 The opening press conference took place during the lunch break, to allow interested participants to attend. Even though much of the focus was on Greta Thunberg, the organizing team was able to present the summit and its goals. They had the on stage support of Prof. von Weizsäcker and Nobel prize winner Jacques Dubochet to ring one more time the environmental alarm. All of them urged the politicians, the journalists, and society to wake up and answer the call for action.

In an answer to criticism, the organizing team invited on stage the initiators of an European Citizens’ Initiative. Those Fridays for Future activists redacted a text to impose the climate emergency on the European commission’s agenda. This is one example among others that shows the young climate activists are doing more than ‘just demonstrating’. An other example of this concrete involvement is the case of Fridays For Future Vaud, where a group has been in discussions for several months now with the State council, and have put forward a hundredth of concrete measures to engage a societal fight for climate justice.

The journey concludes with the choice of the discussion topics for the week’s working groups. They were conducted in a plenary session, which shows good example of horizontal governance and group intelligence.